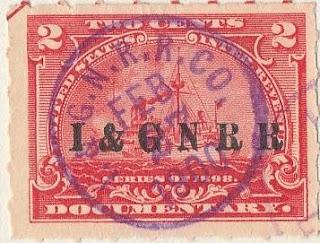 Printed Cancel:
I  &  G  N  R  R
Handstamp Cancel:
I.  &  G.  N.  R.  R.  CO.
FEB
27
1900
Many railroads used printed cancels on the 1 cent battleship documentary for their use on waybills.  Far fewer used them on the 2 cent documentary.  The International & Great Northern Railroad was a railroad that primarily operated in the U.S. state of Texas.  The I&GN, like other railroads of its time, had many financial troubles and went into receivership on several occasions. Jay Gould acquired control of the I&GN in December, 1880, but was forced to sell it in the early 1920s. Finally, on March 1, 1956, the I&GN was bought by the Missouri Pacific Railroad Company and became a major part of its network. 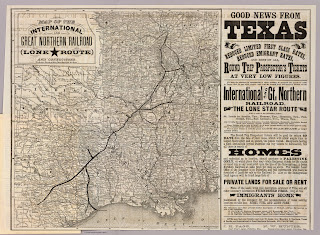 I&GNRR Map
Posted by John Langlois at 1:00 AM