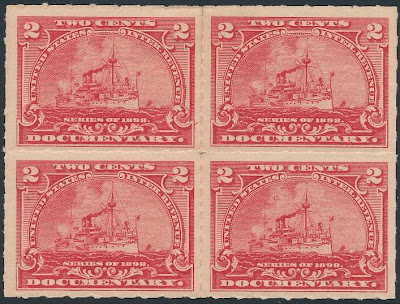 Perhaps the most significant feature of the 1898 revenue series beyond the basic battleship design is the method the Bureau of Engraving and Printing applied so that users could separate the stamps. Standard round perforations (now mostly history due to die cutting used on self-stick stamps) were not used on the 1898 revenues. Instead, the Bureau used both "rouletting" and rectangular perforations. Roulette: The block above has been rouletted. As you can see by looking between the stamps, there appear to be a series of cuts. These were made by a wheel with the equivalent of short knife blades on it that cut in between the stamps. The process removes no paper and does not make a hole. By this standard a roulette is not a perforation. Hyphen Hole: The block below has hyphen hole perforations. This process is a perforation process and does remove paper from the stamp sheet. Unlike normal round perforations these are oblong slots that look something like hyphens, hence the name hyphen hole. 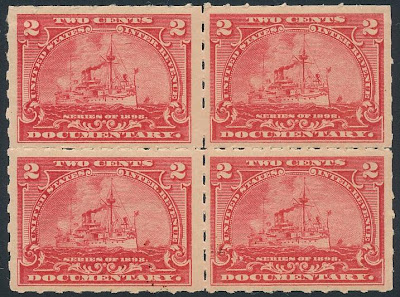 When the stamps first appeared in 1898 they were exclusively scored using rouletting. By early 1900 only hyphen-holes were used by the Bureau. I chose blocks to illustrate the difference between roulette and hyphen-hole. Single stamps make it sometimes difficult at first glance to detect the difference between hyphen hole and roulette. Formally, hyphen-hole stamps on this issue are labeled as HH 7 since there are 7 holes per inch. Rouletting in R 5.5, since there are 5 and half roulette cuts per inch.
The 2 cent documentaries did have stamps that were issued without any rouletting, at least as partial roulettes. There are no known stamps, at least to my knowledge, that are combined imperforate and hyphen hole.
Posted by John Langlois at 9:43 PM