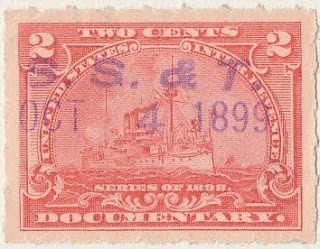 Many railroad cancels are featured in this blog including those of the Lake Shore and Michigan Southern Railroad.  The LS&MS was caught up in a law suit smaller oil companies like SS&T brought against Standard Oil for negotiating and demanding cheaper freight charges for carrying oil while forcing the LS&MS to charge competitors more.
Posted by John Langlois at 1:00 AM