Cancel for October 25: The Turners of Philadelphia 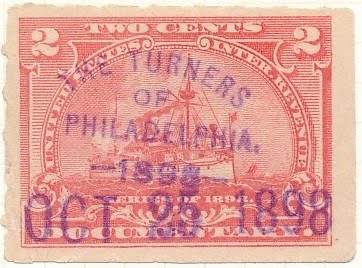 
US commemorative postage stamp issued in 1948 for the 100th anniversary of the founding of The Turners. (Scott 979)

Many Germans immigrated to the United States following the failure of the 1848 revolution designed to introduce democratic reforms into the governments of the German states. Among these immigrants were members of the Turners, an athletic and political organization founded in Germany during the second decade of the 19th century. Turners quickly established societies (known as Turnverein or Turngemeinde) in the American cities in which they settled. These societies served as athletic, political, and social centers for German communities in the United States. The Turners most important contribution to American life in their communities had been the advocacy of physical education and fitness. Turners successfully lobbied local school boards in many cities for the inclusion of physical education classes in the curriculum and Turner instructors served as the directors of physical education programs in many school systems in the late 19th and early 20th centuries.

---from the American Turners Local Societies Collection, 1866-2006. Abstract and full document on this organization can be found here: http://www-lib.iupui.edu/files/u51/mss038.pdf.