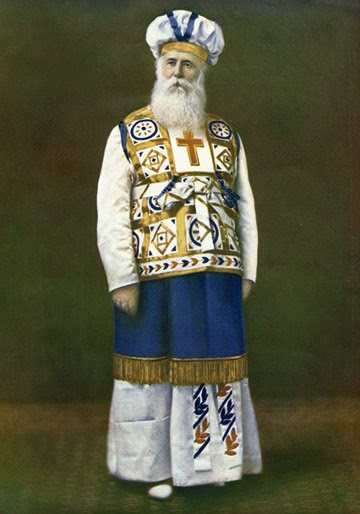 
During my years in the early 80s at Northwestern University in Evanston, Illinois, the town of Zion, Illinois, occasionally came to my attention, as it was north of Evanston just before the Wisconsin state line.  But I never gave the town much thought, except that a favorite pop band of mine, Shoes, was based in Zion.

But then a curious 1898 revenue item came my way this past month that brought Zion, Illinois to my considered attention and led me to research the origin of Zion Lace Industries, the town of Zion, and its Christian theocrat and faith healer founder, John Alexander Dowie.

The curious item 1898 item is the interest coupon below:

Zion Lace Industries interest coupon - 12th coupon, from certificate 502, with the signature of John Alex. Dowie at the bottom, who was, according to the coupon, sole proprietor of Zion Lace Industries All land in Zion, Illinois, and Zion City Bank was wholly owned by John Alexander Dowie.

Reverse side of the coupon, with a 2ct documentary stamp to pay the promissory tax.  Stamp cancelled:

Interest was paid semi-annually, in January and July, so coupon 12 was year 6 from the certificate's issue date.  John Alexander Dowie's newspaper, The Coming City, advertised (see at left) the sale of the preferred share certificates represented by this coupon in December 12, 1900.

$400,000 worth of $100 certs were available, so the above coupon came from certificate 502 out of a total of 4000.  Dowie advertised that he would pay increasing amounts of interest over time, yet this coupon and subsequent coupons in my possession indicate he or Zion Lace Industries only paid 6% interest per year as all the semi-annual coupons were exchanged for $3.  There may have been a supplementary coupon that paid what the advertisement to the left calls "contingent" interest, but the semi-annual coupons do not provide an indication that the contingent interest was paid.

Dowie was an extraordinary figure in American history and American Christian Evangelism.  When he died in 1907, he had left behind a new city, collapsing under debt, governed under theocratic laws, and totally created and built by Dowie and his followers. 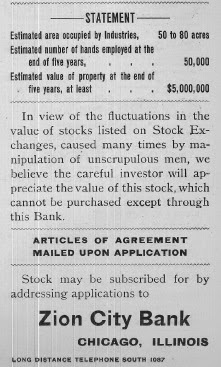 Zion City's lots were first made available to the public in mid-1901, while Dowie and his staff busied with the creation of the skeletal elements of a new city, including laws, streets and public utilities.  Ultimately, Dowie had a stroke in 1905 when he was 58 years old, and never fully recovered before his death in 1907.  Because of the dire financial circumstances of the city of Zion, Dowie's managers seized control of the enterprise after his stroke and worked to salvage the viability of the city.

But before Dowie became seized with creating a new Christian city in northern Illinois, he had led a life as a Christian faith healer and businessman with a giant vision and ego, going so far as to consider himself the second coming of Elijah.

Dowie was born in Scotland, moved to Australia with his parents, where he became seized with his evangelical and faith healing passion before moving to the United States.  He made a major name for himself in the US by setting up operations across from the entrance to the Chicago World's Fair in 1893, where he conducted faith healing services and preached sermons daily.

Through his Christian Catholic Church and his publications like Leaves of Healing, a weekly paper, he criticized doctors, pharmacists, and Freemasons.  He espoused flat-earth theory, while preaching that Anglo-Saxons were a lost tribe of Israel, opining that Saxons are Isaac's sons.  He pointed out the inevitable since "Isaac's sons" and "I-sax-sons" are homonyms.


For Dowie, Zion Lace Industries was an important business to try to keep Zion City solvent.  His project was largely completed, though Zion's insolvency meant that the lace plant was sold to Marshall Field & Company in September 1907, shortly after his death.

Dowie's thinking behend the lace plant can be found in the The Coming City, December 12, 1900, John Alexander Dowie, Editor and Publisher:

The Importance of Zion Lace Industries.

God is giving His people Zion Lace Industries in a most wonderful way.  That is the first and greatest argument for its importance.

The story cannot all be told now, and there is much of it which can never be told.

Nevertheless, many things have been and will yet be recorded which will show how marvelously God has led, all the way along.

The working out of God’s plan for Zion Lace Industries began years before the General Overseer came to America; indeed, it is not for man to say how far back in history the beginning of that work may lie.

God’s direct guidance, however, can be traced back many years. 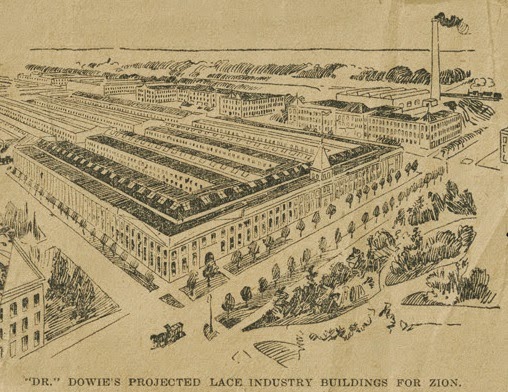 Every step of the way, in recent years, shows with remarkable clearness the evidences of Divine intervention for Zion’s sake.

How God raised up and trained the man Samuel Stevenson and sent the Little White Dove to bring him and his brothers into Zion with all their skill, artistic ability, executive force and intimate knowledge of the art of lacemaking has already been told.

It was God who directed in the purchase of the factory at Beeston, Notts, England, for Zion Lace Industries, and brought about so wonderfully all the various transactions necessary, smoothing out all difficulties.

God’s power was manifested in giving great success in the ordering and purchasing of just the machinery needed for the industries.

God gave Deacon Stevenson and the General Overseer the right men to bring to America to teach Zion workers the art of lacemaking.

He gave victory over all the foes who tried to prevent in this work.

God gave His servant, Attorney Samuel W. Packard, great wisdom and skill, so that he was enabled to make an argument which is now famous in the two hemispheres, and to win a glorious victory over all the Labor Union and other enemies, open and secret, who attempted to prevent these Lace Experts from landing in America.

God gave this same attorney such wisdom the drafting of the Articles of Agreement between Zion Lace Industries and the shareholders that legal experts have declared it to be a marvel as a legal document.  “It gives the shareholders,” say the lawyers, “all the advantages of a corporation and a partnership, with none  of the disadvantages of either.

Another grand argument for the importance of Zion Lace Industries to Zion and to the extension of the Kingdom of God, is the fierce and determined fight which the Devil and all his forces is making against their establishment.

With a curious mixture of reckless daring, diabolical cunning and helpless fury, he has attempted to block Zion’s every move in the matter.

Dowie and his followers tried to escape the lawlessness and sin of American society by establishing a utopia, Zion City, in northern Illinois, with Dowie as "general overseer." In the first issue of his paper The Coming City (June 27, 1900), he wrote: "Zion City will be built by Theocrats. It will be run by Theocrats. It will aim to overthrow Democracy, and establish Theocracy over all the earth, and sea, and in deepest hell, even as God rules in highest heaven."

As of 2014, Zion City is a secularly governed city.  Democracy was not overthrown, and the US Constitution remains the law of the United States.