Stephen Birmingham's 1967 non-fiction book "Our Crowd" The Great Jewish Families of New York (find at Amazon here) is a must for collectors of 1898 revenues, especially the dollar commerce values.  While the dust jacket is out-dated with its victorian lace and tiffany style lamp, Birmingham's family-business tree and family histories provide a simplified but useful map of the relationships between some of the most significant families and enterprises in New York and consequently some of the greatest users of revenue stamps during the 1898-1902 tax period. 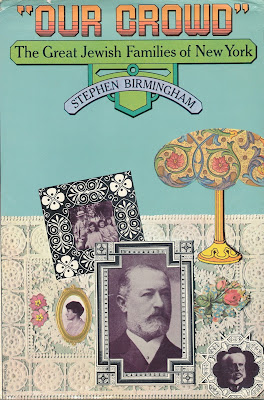 The 400 page book documents the stories of wealth creation of the great Jewish families of New York  through the 19th and 20th centuries, including the Seligmans, Lehmans, Kahns & Schiffs.  It is not only an interesting history but a good read. 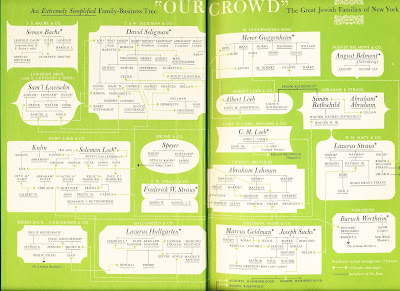 Above is the inside cover, illustrating the family-business tree.

Over the next week this site will feature some of these families and individuals through their firm's appearances on stamps and documents used during the 1898 tax period. For my collection, the book has helped to provide a kind of puzzle guide.  Many cancels can be fit into the boxes of the family tree above, for example.  Better, though are the prospects for future collecting.  Most collectors find their satisfaction in filling the spaces in pre-printed albums.  The compulsion to collect and complete is fundamental to most of us in the hobby.  The collector of revenue cancels has in most cases eschewed the printed albums for space-filling, and we need find our guides that might indicate completion some other way.

For example, the lists of members of the New York Stock Exhange or the Chicago Board of Trade from 1898-1902 are an important part of my collecting library, especially as computer searchable documents.  Each list provides an exhaustable set of firms and indiividuals that might have used revenue stamps from their respective trading associations.  Similarly, the book Our Crowd provides a similar exhaustive set of possible users of 1898 revenue stamps, just organized along family lines and showing the interconnectedness of family and community.

In the coming days the site will feature the following families/firms and their cancels which feature Mr. Birmingham's book:

For the collector of 1898s, how does one organize their collection of stamps like those below?  Their are many ways; the history of families as told in the book Our Crowd is one way. 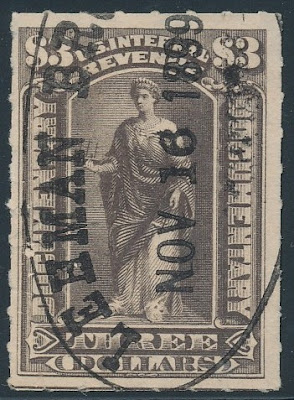 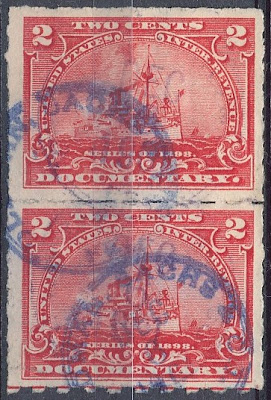 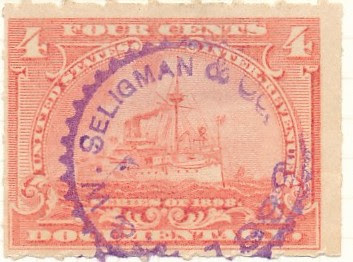