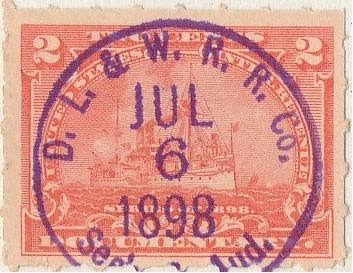 Hand cancelled six days after the tax went into effect, this 2 Cent Documentary stamp was used by the Delaware, Lackawanna, and Western Railroad.
The DL&W RR was a coal line, hauling coal out of Pennsylvania's Lackawanna River valley to its eastern terminus in Hoboken NJ. The line eventually extended Buffalo NY, and served as a land-bridge line between the Great Lakes and the Atlantic ocean. The DL&W was formed in the early 1850's, saw great fortune in the 1930s, then went into a steady decline as America shifted away from coal as its primary fuel. DLWRR eventually merged with former rival Erie RR in 1960 to form the Erie Lackawanna (EL). This merger of 2 once-great roads, both going extinct as their primary livlihood dried up, then disappeared altogether when the EL was one of the six bankrupt railroads that formed Conrail in 1976.
I will Erie Railroad cancellations coming soon.
Posted by John Langlois at 9:31 PM