The Revenue Stamps of the United States: Battleship Part Roulettes 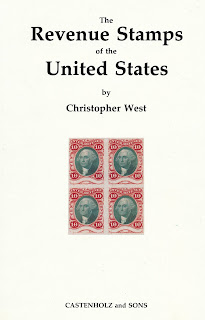 Christopher West/Elliot Perry's book on the revenue stamps of the United States has a short chapter at the end of the book and the section on 1898 revenue stamps for "various items."  One of those items is a section on part roulettes.  Here is an excerpt, with my own illustrations (book text in italics):
Part Roulettes. -- A number of the documentaries and proprietaries exist rouletted vertically, but not horizontally, or vice versa, and at least one stamp -- the 2c documentary -- is known imperforate, that is, without any horizontal or vertical rouletting.  The Boston Book also mentions the 10c documentary imperf, but this value is not now so catalogued.  The stamps listed as existing rouletted horizontally only are: 3/8 and 2c proprietary and $1 green, $3 brown and $10 black documentary.
The 3/8c proprietary is not rare, nor particularly scarce, part rouletted.  Blocks are frequently seen and at least one full sheet is in existence.  The 2c proprietary part rouletted was offered for sale in May, 1901, the owner stating only 120 pairs existed.  The would indicate that not less that two sheets escaped the vertical roulette...

The "not rare" 3/8c proprietary part roulette.  This pair is burnt orange in color.  Color differences in orange stamps are often due to sulfurization, which tends to turn some of the 1/2 cent orange documentary and 3/8 cent proprietary stamps darker, if not brown.  If the colors are true, however, differing colors in the pairs would indicate the part roulette error occured on more than one press run.

Margin copy of the 2c proprietary part roulette.  I have two pairs of this stamp in this condition and the pairs are not that expensive or scarce.  There are certainly more copies than the 120 pairs reported by Perry.
The stamps listed as existing rouletted vertically only are: 1/4c, 5/8c, 1c, 2 1/2c, 5c proprietary and 1/2c gray, 1c, 2c, 3c, 4c, 5c, 10c, $1 green documentary.  The Boston Book mentions also the 1/8c and 1 1/4c proprietary, but the existence of the latter stamp part rouletted could not be verified.  As the 1/8c is not now so catalogued, quite likely it also lacks proper verification.  The dealer who offered the 2c proprietary "imroulette" vertically, also offered the 2c proprietary, rouletted vertically only, in January, 1901, and stated that the entire lot was two sheets.  This would be 200, 216, or 232 stamps, but others may have been found and the stamp is not very scarce today.  The 5/8c part roulette, is usually found in vertical paris cancelled "Maltine."  Only a few pairs and strips are known.  The 1/4c, 1c and 5c are seldom seen. 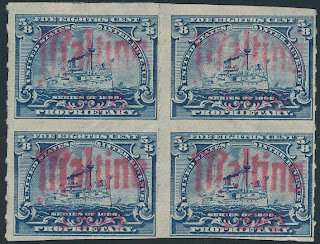 Part roulette 5/8c proprietary block of 4 with Maltine logo handstamp cancel.  While Perry indicated this part roulette to be scarce at the time of his writing, the current catalog value for a pair, $85, would indicate that more pairs have come to light in the past 90 years. 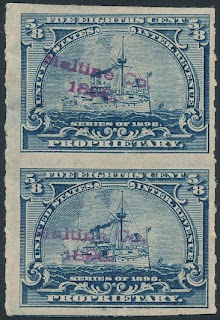 5/8c proprietary part roulette pair with Malitine handstamp in roman.  Perry/West doesn't indicate the the type of Maltine handstamp cancel that was familiar to him. 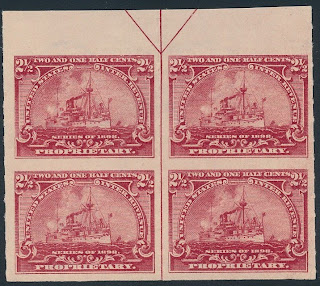 2 1/2c proprietary part roulette vert guideline block of 4. Image of this block can be found in the Joyce and Tolman auction catalogs. 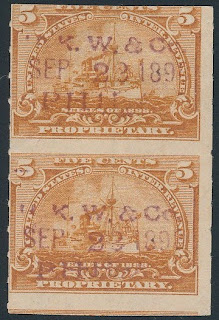 5c proprietary part roulette pair.  Reported by Elliot Perry as "seldom seen".
The 1c, 2c, and 10c documentary part rouletted are fairly common, the 1/2c less so, and the 4c and 5c quite rare.  Of the 4c, only two blocks, both unused, which came from the same sheet, are on record.  The 5c was reported from Philadelphia in 1898, and some were also used in Chicago in October of that year. 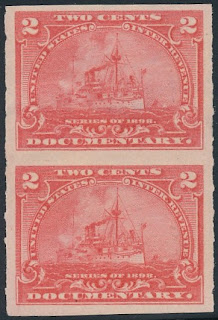 2c documentary pair part roulette
Examples of 1c and 10c part roulettes can be found in previous posts.
Posted by John Langlois at 12:01 AM