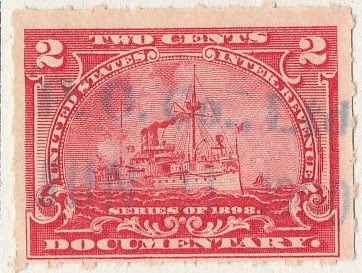 From The Official Railway Equipment Register of 1901:

The Producers Oil Company represented a group of independent oil producers long in the sites of John Rockefeller's Standard Oil.  For years the company maintained its independence despite constant hostile takeover attempts by Rockefeller.

By 1897, Standard Oil interests owned a majority of Producers' stock.  But the voting and controlling shares of the firm remained with the forming owners of the company, and legal actions by Standard to seize control through majority ownership were rebuffed by the courts.

The travails of the Producers Oil Company were documented by Ida Tarbell in her muckraking classic, The History of The Standard Oil Company.

The year of this cancel, Producers Oil Company became part of a larger holding company called the Pure Oil Producing Company.   Eventually Pure Oil would become a national name brand in the petroleum industry.  The company was independent and successful through the mid-1960s, when it was absorbed by Union Oil, which in turn branded itself Union 76.  Union 76 was the property of Unocal, which merged with Chevron in 2005.