On Beyond Holcombe: Fairchild Brothers & Foster 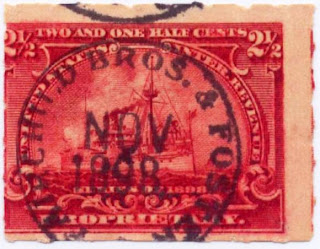 Fairchild Brothers and Foster was another of a group of specialty drug manufacturing and supply companies that flourished in New York City around the turn of the Twentieth Century. It took its name in 1881, when the Fairchild Brothers, Benjamin and Samuel, brought Malcomb Foster into their partnership. The Fairchild brothers were born in Stratford, CT, Benjamin in 1850 and Samuel in 1852. They both studied at the famed Philadelphia College of Pharmacy, and trained as pharmacists at the older New York City pharmacy firm, Caswell, Hazard & Co. Samuel, the younger brother, also served a stint as a pharmacist with McKesson & Robbins. (These two long-lived and well-known companies also applied cancels to battleship revenues and will appear again in due course in this extended study).


In 1878, the two brothers launched their own partnership as Fairchild Bros. Foster, born in 1860 and another alumnus of McKesson & Robbins, although quite young, apparently made a significant contribution of capital to the firm when he joined it. The firm concentrated early in products to aid digestion, specializing in the production of the digestive enzyme, pepsin, and the entire peptonizing process. In the pre-analytic chemistry era of medicine, such pepsin fortified products were then considered by established medical authority to be particularly helpful to infants in developing proper digestive systems, to ill people in maintaining proper digestion against the ravages of disease and to old people in keeping their digestive systems strong into their dotage. Similar claims - probably based upon the same kind of “correct-hunch” (i.e. sounds right) but ultimately dubious science - are advanced today for iron-fortified or omega 3-fortified products. In support of its peptinized products, F B & F published several editions of its pamphlet “Handbook of Digestive Ferments.” 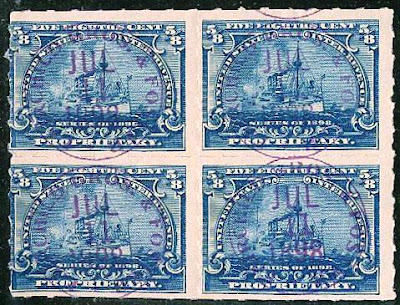 The company was often praised within the trade as a well organized and supervised, and it too escaped the scrutiny of the genuine quack medicine chasing reformers. For that reason, rather than concentrating on the specifics of its business, it might be more instructive to examine the sumptuous style of life a fairly small but specialized business like F B & F produced for its principals. In 1908, the Pharmaceutical Era, an industry publication, portrayed and described the offices of F B & F in the following manner: 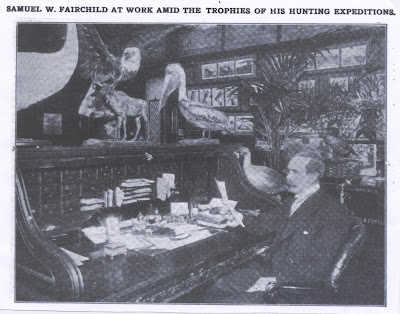 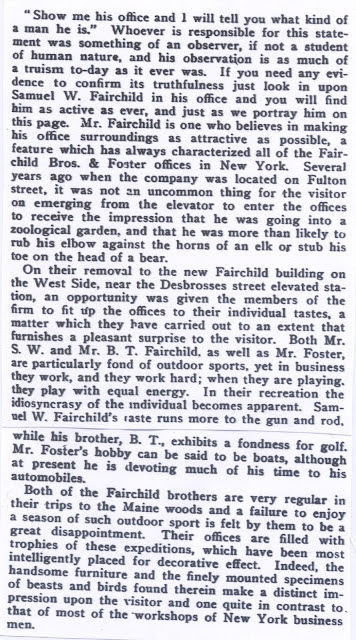 Because of their wealth, the Fairchilds traveled in fashionable circles and mixed with others who had attained the rarified sphere of high society. In a 1914 compendium of lives of prominent Americans, Samuel Fairchild’s achievements and connections were listed as follows:

Samuel passed away at the age of 75 in 1927, and his older brother, Benjamin at the venerable age of 88 in 1939. Forbes, the youngest member of partnership died a year before Benjamin at age 78. The company itself, as often the case, did not survive the last of its founders for very long. It continued as an independent company only until 1946, when it was acquired by Sterling Drug Company, itself the survivor from among an amalgam of companies also launched in this period. By that time, the most well-known of F B & F’s products was Phisoderm, an acne fighting product still available today, although ownership of the product has changed a number of times since 1946, and the make-up of the product itself was altered in the 1970s after the Federal Drug Administration banned products which contained more than 1% hexachloraphene, then its principal active chemical agent.