I'm not certain how the Garfield-Perry Stamp Club's annual exhibition came to be called "March Party" although I've always had a good time whenever I've attended the show.  They do sponsor a nice wine and cheese reception the evening of the show's opening day; perhaps that's the "party".  The club itself is named in honor of James A. Garfield, and Oliver Hazard Perry; for more details go here.

According to list of exhibits, there will be 10 revenue exhibits at March Party totaling 56 frames, although just one exhibit of 1898 revenue material.  Bob Hohertz is showing his Revenue Stamped Paper of the Spanish American War Era exhibit. You too can view much of  the material right here on 1898Revenues as Bob is a major contributor to this site particularly in the area of revenue stamped paper.  Although I've seen his exhibit several times, I'm eager to see it once again as Bob advised in an email some months ago that he was revising the focus away from a "fiscal history" aspect to a more "traditional" presentation.  To learn more about the jargon associated with philatelic exhibits, the basic types of exhibits, and how they are judged take a look at the APS Manual of Philatelic Judging.

Enough about the show, let's look at another Cleveland related document. 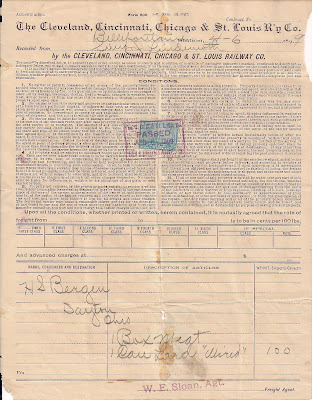 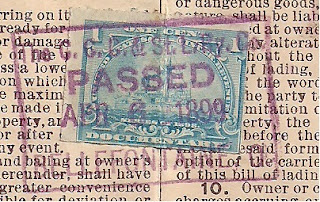 detail of boxed cancel
The C.C.C. & St. L. Ry. Co.
PASSED
APR  6  1899
BELLEFONTAINE, O.
Simon Lindemoth ships a box of meat and a can of "wired?" lard from Bellefontaine Ohio to H. S. Bergen in Dayton, Ohio.  It didn't matter how much material was shipped, nor how far, nor how many rail line transfers were necessary to complete a shipment, a bill of lading covering a shipment from one domestic destination to another was taxed a flat 1-cent.
I won't go into the history of the C.C.C. & St. L. Railway, better known as the BIG 4 Railroad, as that's been briefly covered in several previous BIG 4 blogs.  I wrote about C.C.C. & St. L. Railway Corporate Bonds, Bob Hohertz showed some Parlor Car tickets, and John featured a cancel of a subsidiary line in one of his cancel of the day blogs.
Here's another C.C.C. & St. L. Railway cancel on a 1-cent R163 documentary that likely also is from a bill of lading. 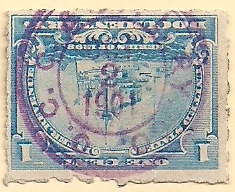 ﻿
C. C. C. & ST. L. RY. CO.
OCT
2
1901
I'd be remiss if I didn't close with a link to the American Revenue Association website; it's their annual meeting that I'm attending at the Garfield-Perry show prompting these Cleveland-related blogs.
﻿