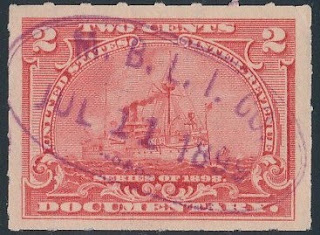 M.  B.  L.  I.  CO.
JUL  11 1899
The Newark, New Jersey-based Mutual Benefit Life Insurance Company was founded in 1845 and dissolved as a firm in 2001.  The company was known as the "Tiffany" of insurance companies because of its high percentage of upper class clientele.  The company was taken over by the State of New Jersey in 1991 after real estate losses prompted a run by policy holders.  The collapse of the firm was the largest ever by an American insurer at that time.


The original MBLI headquarters at 300 Broadway in Newark is listed in the National Register of Historic Places.  It is currently a nursing home and is owned by the Archdiocese of Newark.
Posted by John Langlois at 12:01 AM